The ancient Egyptians were very knowledgeable indeed about binary stars (see e.g. the Daily Mail article). Both Mayans and Egyptians were very curious of the star Sirius. The Egyptians used Sirius to calculate the annual flood of the Nile. If we choose to believe in binary star systems and that Sirius is the counterpart or the dancing partner of our Sun, we can construct the following picture. 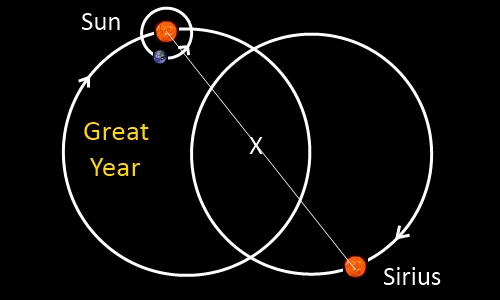 The marked X is a line which always remains the same, while the Sun and Sirius move following the same pattern all the time in relation to it. According to some, the Great Year would represent the full circle of these two Suns. (It is still important to realize that the Great Year takes the whole sky to make a full circle.) Following this thinking, we could see the past and future as presented below. 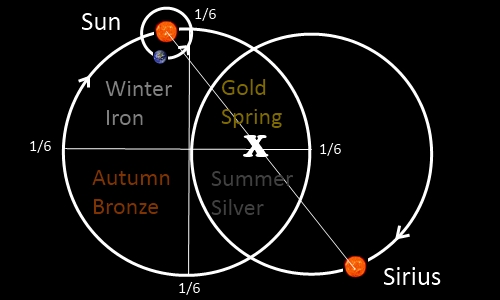 The Star map above shows us the four seasons of the Great Year as seen from the Sun-Sirius point of view. Some traditions teach us that Jesus took the symbol of Pisces and started a new era over 2000 years ago. One instance of the symbol of Pisces or Vesica Pisces appears in the mutual intersection of the Sun and Sirius. This symbol appears every time when the two circles (or balls) are united with the most natural points to each other (Provenzo Jr., Provenzo, & Chiappone; Soap Bubbles, and Burns, 2004; Double Soap Bubbles: Proof Positive of Optimal Geometry). 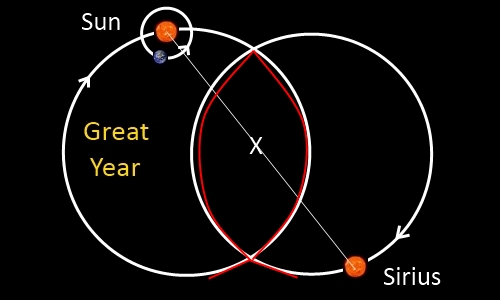 If we choose to believe in Alchemy and Astrology, together with the Law of Creation, we should explore the space, stars, constellations and planets the same way we study materials, cells and atoms. In other words, the same geometric shapes apply to biology, astronomy, geometry, physics and chemistry. The laws are the same everywhere. We will understand star constellations, which can be seen as geometrical shapes such as lines, planes, triangles, squares, circles, pentagons, hexagons etc. After all, the Emerald Tablet teaches us: "That which is below is like that which is above that which is above is like that which is below to do the miracles of one only thing."