Basics of Astrology IV: world history according to the zodiac

The world history can be understood following the guidelines of the Zodiac wheel and written Scripture. In ancient cultures, the common man was familiar with star maps and movements of the planets - usually even more precisely than the amateur astronomers of today.

The picture below represents two eras which are the most important to understand for us. The era of Pisces began when Jesus entered the world or shortly before that. Every sign has its opponent, and for Pisces it was the sign of Virgo, or the Virgin.  We are all familiar with the story of Jesus' birth - how he was born to a virgin mother, Mary. Remember that when using the Great Year as time dimension, the wheel rotates clockwise. 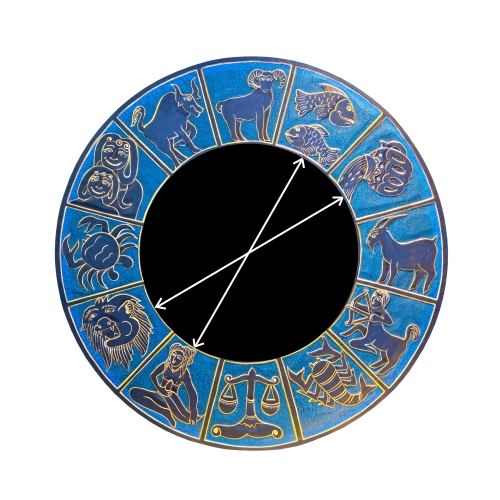 At the beginning - Gemini and Genesis

The Bible begins with Genesis, when the first two people are created. The Bible even says that Eve was made from the rib of Adam. In a similar story of creation, the twin brothers Romulus and Remus create ancient Rome. This happened during the symbolic time of Gemini, or Twins. The Twins, Adam and Eve, started this cycle and the next sign to follow them was the Taurus, or the Ox.

After the Twins were banished from Paradise, people began to consider cows and oxen as sacred. For instance, the Egyptians worshipped Apis, the bull-deity. This was time of Taurus which ended with Moses climbing the mountain of Sinai (or Horeb). Moses spent 40 days on the mountain to receive the 10 commandments. When he came back, the people had built and started to worship the golden Taurus statue (Exodus 32:4). Moses was disappointed and returned back to the mountain. After another 40 days he come back with the commandment which forbade the worship of the Taurus. The time of Aries began. You can also remember that God taught Moses to paint the edges of doors with the blood of Aries before leaving Egypt (Exodus 12:1-12). That was the first sign of a new era.

The sign of Aries began the time of the Shepherds. The shepherd is continuously in contact with nature and guided by the All - the Holy spirit. Therefore shepherds have been typically considered holy persons with tremendous wisdom and the ability to see the future. The time of Aries ended when Christ was born.

The Gospel of Luke (2:8-12) teaches us: "And there were shepherds living out in the fields nearby, keeping watch over their flocks at night. An angel of the Lord appeared to them, and the glory of the Lord shone around them, and they were terrified. But the angel said to them, “Do not be afraid. I bring you good news that will cause great joy for all the people. Today in the town of David a Savior has been born to you; he is the Messiah, the Lord. This will be a sign to you: You will find a baby wrapped in cloths and lying in a manger.”

The shepherds hear the news about Jesus first, because they are marked by the sign of Aries. In the Gospel of Luke there is also a reference to sign. This is the sign of the new era – that of Pisces. In the story there are three wise men who followed a star to find Jesus. The birthday of Jesus was moved to December 25th when sun rises after staying dead for three days (21st-24th December) as you remember from the Time dimensions article.

Over 2000 years after the time of Jesus, the Great Cycle is about to reach the next era in human history. This new age of Aquarius and Leo is the age of liberation (the Baptism of Water) and the age of the king of all beasts, the lion. It is also known as the new Golden Age of man and the Golden Spring – or the Golden Dawn. According to the Knowledge this is the time of reaching the next level of consciousness – the end of selfishness and ignorance, and correspondingly the beginning of oneness, virtue and wisdom.

Because of Leo as the opponent of Aquarius, there will also be a giant war. It is our duty to understand what is (and will be) happening and to minimise the damage. The events described in the Book of Revelation will soon take place, but hopefully they will remain only mental and therefore take place between our ears. This mental war, where all our sins is burned away from our thinking-patterns, is called 'The Greater Jihad' in Islam.

Sir Isaac Newton concluded that the Golden Age would begin in 2060 (with apocalypse), while the Mayans thought it to begin between December 2012 – end of March 2013. By learning the stars, the Zodiac and Knowledge, we know that you can make your own calculations and act wisely. After all, this is also one major reason why House of Truth has been launched.