“The knowledge of all things is possible.” –Leonardo da Vinci

For over ten years Leonardo carried a painting with him wherever he went. No matter what he did, he always returned to examine this painting, as if it were a source of his inner peace and strength. 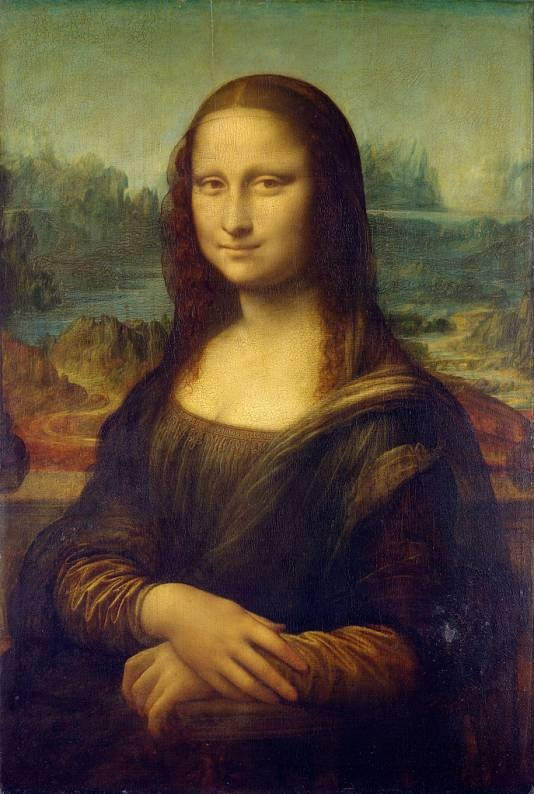 Leonardo da Vinci is considered one of the most brilliant characters of the human history. More specifically, Leonardo epitomizes the curious mind: thirsty for all kinds of knowledge and overflowing with creativity. There is much speculation about Leonardo’s stance on God. In his monograph on Leonardo, Giorgio Vasari comments that perhaps Leonardo thought it better to be a philosopher than Christian. Perhaps so. After all, we know that Leonardo assumed an unprejudiced relationship to both Science and Art, which made him the Renaissance man, leaving us an unparalleled legacy of art and inventions.

Through the Mona Lisa we realise that irrespective of his relationship to Christianity, Leonardo treated the question about God with a similar curious and passionate outlook with which he explored everything else. This study introduces Leonardo da Vinci as a student of not only of the Bible, but of Ancient Egyptian knowledge and Jewish mythology, which were strictly banned by the Catholic church of his age.

The Mona Lisa is a large collection of Knowledge. The Knowledge is encoded in symbols, which are explained and decoded in this study. Leonardo is but one in a line of many other wise men to have used symbolic language in communicating ancient truths. The reason for symbolic language is that symbols are universal and incorruptible: they convey the meaning they have carried throughout history, without distortion. What is more, and especially in the case of Leonardo – speaking the truth to the general public might have caused his life, if the truth was something the Church of his time would have disagreed with.

Knowledge – the eternal language of symbolism

Since the beginning of the human race, it has been habitual for people to acquire and hide knowledge. Our ego always moves forward and thus tries to refine everything around us into something new, or into something we can call our own.

However, the knowledge that has been hidden is the masculine aspect of all things – it never moves or refines. Thus it is called ‘Knowledge’ by early Christians in Nag Hammadi texts and ‘Father’ by Jesus. Correspondingly, the Mother is Life. And finally, there is the All, which is the Father-Mother, the Holy Spirit. We find a counterpart to the terms of the Nag Hammadi texts in the Book of Genesis in the Bible, describing the Trees of Knowledge and of Life, and their combination, which is the Holy Spirit.

Several secret societies have taken part in hiding, but also maintaining the knowledge for later generations. We can see the secret language of symbolism used e.g. in Westminster Abbey, whose towers are clearly marked with the symbols of the Moon and the Sun, connecting them to the towers in the Kabbalistic Tree of Life. Another example is the Eiffel tower, with the 72 names engraved into the four cardinal directions. The 72 names of God are also familiar to us from Kabbalah. The number 72, scattered into the four directions, forms an equation 72 / 4 = 18. The Hebrew word Chai has a numerical value of 18, meaning ‘Life’ or ‘Living’. If we wish to look deeper, we will find that the tower, named after the builder Gustave Eiffel, carries a message in its own name. After all, EIFFEL, reorganized, becomes FE LIFE, which means, of course, Iron and Life, or Living Iron. In the language of symbolism, Iron is a symbol of Father, and Life is a symbol of Mother.

Several great works of art all over the world seem to be decorated randomly with signs and symbols, but this is only a misinterpretation due to the lack of understanding of the eternal language of symbolism. There is a myriad of instances of architecture, art and Scripture describing eternal themes such as the Great Year, the Work of Creation, the Image of God and the True Name of God. Such symbolic accounts include the Pyramid of Giza, the Roman Pantheon, the Temple of Jerusalem, the Stonehenge, the Mayan calendar, the One Dollar Bill, the Coat of Arms of Vatican City, the tales of King Arthur, just to name a few. Leonardo’s Vitruvian Man, the Last Supper and the Mona Lisa, among others, were his effort to fulfill the duty of maintaining and transferring the knowledge to following generations. What once was hidden, is now to be found again.

This study is, in a way, a mirror image of Leonardo himself. It dives deep into the world of Mathematics, numbers, symbolism, and Scripture. As guidelines we use Leonardo’s own words and sketches, today spread in museums and private archives around the world. We will explain what Plato meant by his famous phrase “Let no one ignorant of geometry enter here”, and to which Leonardo added “Only a mathematician can understand the elements of my work.” We will learn the basics of a cryptic language, leading us to the testaments of Knowledge and Life inscribed in ancient scripture, research and works of art. In fact, we will learn that the real message of our most influential teachers such as Leonardo da Vinci, Jesus, Buddha, Mohammad, Pythagoras and Nikola Tesla, is actually encoded in symbols and therefore understood only by few. It is now time to learn the mutual truths behind the seemingly different dogma.

The Mona Lisa leads us to an inner journey. This study is, in effect, a spiritual roadmap. We are introduced to a Way of Truth, a process of profound transformation, even transfiguration. Our understanding grows as we open our minds – trained for logical, rational and skeptical thinking – to the lost language of symbolism. Understanding and decoding the language of symbols requires putting our egos aside. In Cosmos, we can observe the elements of different languages, numbers, measurements and common denominators. This is the foundation from where to proceed in order to achieve a wider understanding. It does not matter who was the first to square the circle – the question is not who or when, but why. Why units of measurements play such a remarkable role in Biblical texts? Why did Leonardo draw a sketch of the Mona Lisa with a reed in her hand? Why were Mona Lisa’s elements chosen to agree with the elements of the Great Pyramid in Giza and the temples described in the Bible? Could the Mona Lisa be a copy of the Duat? An image of God?

At the time of writing this study it has been established that there are certain numbers and letters to be found in the painting (e.g. numbers 7 and 2 can be discerned on the arch of the bridge behind Mona Lisa). Along with these discoveries, the world became aware of another painting, considered to be the “sister” of Mona Lisa. Soon, a third painting revealed, and together, these became the triple Mona Lisas, reunited once more. It is explained here that the Mona Lisa is the Philosopher’s stone, and once we draw the sword from inside of it, the whole Cosmos is presented to us as an image of God.