The Mona Lisa transforms into a Cyclops by cutting the painting in half and mirroring the left side onto the other. If we want to study the new measurements of this image, we could, for instance, measure the distance between the two number 6’s (see Image 45) which are now reflected on both sides of the background. Also, we will take another measurement between the single eye forming at the crux of the painting to the Mano Pantea hands (see Image 22). These new measurements are: 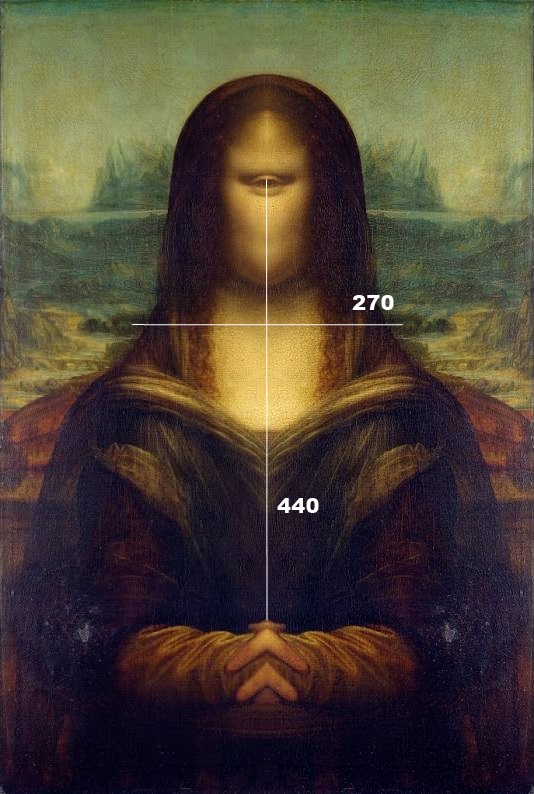 As we can see, these numbers are already familiar to us from the Mona Lisa. As we know, 440 is the exact length of each of the sides of the Great Pyramid in Giza. Number 440 also signifies, in Hebrew language, the letters mem (40) and tav (400), which stand for ‘water’ and ‘cross’ 41.

Correspondingly, the number 270 in Hebrew signifies the letters ajin (70) and resh (200), which stand for ‘eye’ and ‘head’. Number 270 also opens the path to Bible once more. On the cross of Jesus the initials ‘INRI’ were carved (E.g. John 19:20). Again, through Hebrew numerical values we will make the following discovery: INRI is

As it was earlier explained, each Hebrew letter has an astrological sign. For INRI, they are I (Virgo), N (Scorpio) and R (the Sun). One is reminded of an Egyptian tale describes how Horus the Child was poisoned by a snake or a scorpion, and how his virgin mother Isis uses her magic and calls on the power of the sun god, the creator, to heal him. The healing of Horus the Child came to represent a promise by the gods to take care of suffering humanity (Pinch, 2002). Perceiving this symbolic similarity between the legend of Jesus Christ and the Egyptian tale of Horus, we may begin to understand the perpetual canon of scripture which every time tells the same true message.

The symbolism of INRI is bears huge evidence for this study, but we must learn more about the number 270 in light of Hebrew language. In Hebrew there are so-called dual words, which are almost similar to each other, but have an opposite meaning. This is exactly the same idea, which Leonardo wrote in his journals e.g. “No sooner is Virtue born than Envy comes into the world to attack it; and sooner will there be a body without a shadow than Virtue without Envy.” (Richter, 1888) The numerical value of INRI (270) plays the dual purpose. This is because the numerical value of 270, can be also formed of the numbers 200 and 70. These numbers stand for the letters Resh (200) and Ayin (70), ‘head’ and ‘eye’. Together, resh and ayin form two different words – two extremes:

There are actually two different aspects worthy of our attention in the words ‘ra’ and ‘re’: First thing is that they are two extremes – the good and the evil, which mean that they are the all-seeing eye and the evil eye. Same symbolism is present, when Jesus became a scapegoat and a sacrificial ox.

Another aspect leads us again to Egyptian texts, where god called Ra is often called also as Re. This is the Sun god who was the ultimate source of light, energy and life. His mother, the sky-goddes gives birth to Ra each morning, and his duty is to travel across the sky above the Earth by day, and below the Earth by night. Ra travels with the reed-float 42, and meets the evil serpent Apophis (also known as Apep) every night. Apophis symbolises the evil eye, whereas Ra is the all-seeing-eye, thus together they represent two extremes (Pinch, 2002). These two eyes of good and evil is the common factor connecting Ra and Apophis, Horus the Elder and Horus the Child, Jesus Christ and the cross – and finally the Mona Lisa.

42 Notice the similarity to the tale of Moses and reed-float.