Anagrams are made by transposing the letters to make a different word or phrase. In the Jewish tradition, the use of anagrams dates back to the remotest antiquity. In fact, anagrams can be traced back to the time of Moses and the practice of ‘Themuru’ or changing, which aimed at finding the hidden and mystical meanings in names (Wheatley, 1862, p. 72). In the Talmudic and Midrashic literature, anagrams became a system of Biblical interpretation. Many Kabbalistic writings give rules for composing anagrams. Anagrams were also popular throughout Europe during the Middle Ages – the age of Leonardo da Vinci.

The name Mona Lisa has 8 letters in total and thus there are totally 40320 possible ways to arrange these letters (variations = k):

37 In this calculation, we do not take into account the two similar letter A’s, which would, essentially, decrease the different ways to arrange the letters.

There are numerous theories concerning the origin and definition of alchemy. In general, we can say that alchemy is an ancient Art and Science concerning the Mysteries of Life, of Consciousness and its Evolution. Certain traditional tales teach us that God taught alchemy to Adam and later to Moses, and that Fallen Angels taught it to women in exchange for sex. Some say it is a remnant of lost Atlantean technology, and even that extraterrestrials taught it to our ancestors. The term AL originates in the Arabic prefix which is combined to the Greek term Khemia to give us Al-Khemia, later to become Alchemy. (Bartlett, 2009)

Essentially an attempt to turn base metals into gold or silver, alchemy has a deeper symbolic significance for its practitioners: transforming a metal into gold also means the alchemist him/herself transforming from a state of ignorance to enlightenment. Alchemists used planetary signs, such as the Sun and the Moon, as alchemical symbols. However, during the darkest Medieval times, they had to invent their own complex vocabulary of signs in fear of persecution. Hence, alchemists were forced to act in secrecy to record and pass on their knowledge. Soon they became associated with fraud and extortion. (Signs and Symbols, 2008) This also reveals the motive of e.g. Leonardo da Vinci and other students of alchemy to hide their messages in the form of symbols. 38

38 It is also important to understand that alchemy is a parent of modern chemistry and other sciences. Modern medicines, oils, alcohol, jewelry, explosives, and even the cooked food are different results of alchemical products and/or alchemical process. As you can understand, alchemy plays a huge - although hidden - role in modern-day life.

As shown in Image 47, The Mona Lisa forms an anagram Anima Sol.39 In alchemy, the term Anima Sol means:

Carl Jung studied and taught Anima Sol. He used the term Anima referring to inner femininity of the male subconscious. The New York Association for Analytical Psychology states: “The anima is both a personal complex and an archetypal image of woman in the male psyche. It is an unconscious factor incarnated anew in every male child, and is responsible for the mechanism of projection. Initially identified with the personal mother, the anima is later experienced not only in other women but as a pervasive influence in a man’s life.” (NYAAP, 2015) Most people already know that Jung was well-learned in the fields of alchemy and the ancient Egypt, just like Leonardo da Vinci.

39 An American investigative writer Scott Lund says that he has found this anagram (Anima Sol) in 2007 (Lund, 2015), but I was not aware of his research until in 2014 after already making my own discoveries. 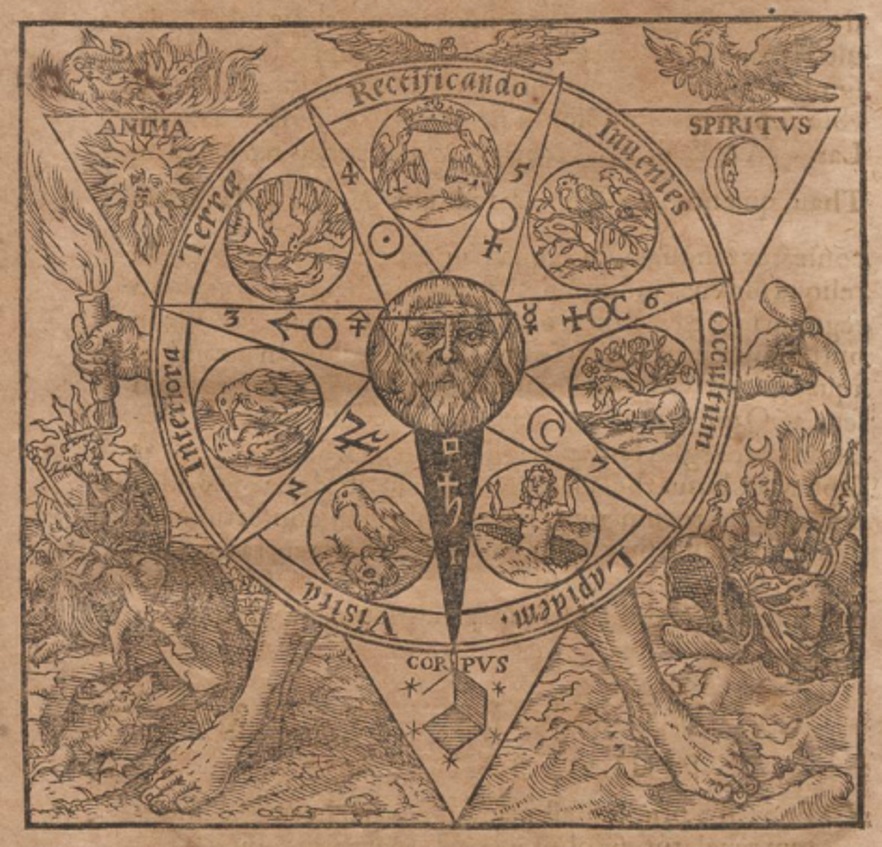 In Image 48 Anima Sol is located in the top left corner. It also portrays the geometric shape of a heptagram, which is possible to draw using a regular heptagon. The heptagon, in turn, is impossible to construct with compass-and-straightedge (proved in Gauss-Wantzel theorem), being the first one of the regular n-gons to do so (n = 1, 2, 3, …). In this context, the heptagram symbolizes i) the hours 6-12 (7 hours) in the Egyptian Underworld, where one’s soul is purified with the eternal fire, and ii) the seven days of creation.

The eternal symbols in Image 48 show us that the first phase (right side) leads from Water to Heaven, where the large bird is located in the upper right corner (see Image 11). This is the Spirit of man. The second phase (left side) leads through Fire back to Earth. Here, Earth is our subconscious, which is illuminated by the light of consciousness – the Sun itself. This is the Soul of man. The third phase (balance in the middle) begins from under the pure feet and leads us back to Heaven once more. This is called the Baptism of the Holy Spirit, which leads to the transfiguration.40

Leonardo painted the Mona Lisa as an image of God. The image of God must embody the elements of Heaven and Earth, and thus Leonardo used the elements of astrology and alchemy. Astrology concerns the Above (it is the science of Giant things) and Alchemy the Below (the science of Tiny things). The operation of these two Sciences was taught by priests e.g. in ancient Egypt and in almost every culture around the world. After the Egyptian era, the same idea was taught by Moses to the Jews, and later by Jesus. In fact, Jesus said that there should not be just one group or nation to enjoy the Law, but that it should be taught to everyone – to every human-being. This Law is universal and it is stored in the Mona Lisa.