The cubit, in turn, (Latin: cubitum, the elbow) was a unit of measurement for length used, for instance, by ancient Middle Eastern civilizations. There are known to be also English, Chinese, and Mexican Aztec cubits. The cubit was nominally the length of a man's arm from his elbow to the tip of his middle, or third, finger. Various different cubits were in use, particularly the common cubit and the Royal Cubit, or long cubit. (Lovett, 2006) Image 43 presents the Mona Lisa deciphered using an ancient Egyptian unit of measurement – the Cubit. The cubit is a unit of linear measurement based on the forearm from the elbow to the tip of the middle finger, and used all over the world in Antiquity and Middle Ages. It is considered to have originated in Egypt approximately 3000 BC. The cubit, generally taken to be 18 inches (457 mm), was considered the equivalent of 6 palms (Encyclopedia Britannica, Inc., 2014).

3 Notice that the painting is here mirrored so the number-clues are highlighted. 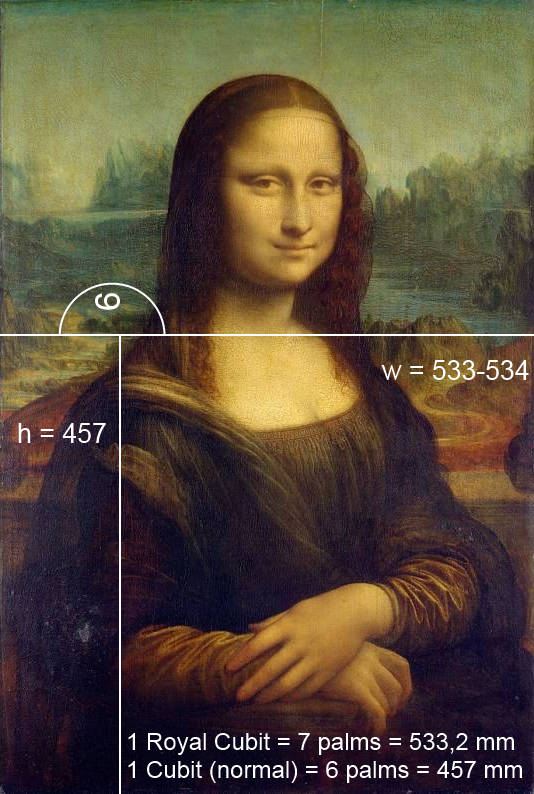 In Hebrew language, the cubit is אמה, amah, and can literally be translated as ‘forearm’ (e.g. Book of Genesis 6:15). Although the cubit plays such a remarkable role in the Bible and temple constructions (see e.g. Ezekiel, 40:5 and 41:1 and Revelation 11:1 and 21:17), the basic length of the Biblical Cubit is unknown. It is estimated as approximately 44.5 cm (as Roman cubitus) for the common cubit, used in commerce, and 51-56 cm for the sacred one, used in construction (Deza & Deza, 2013).

As seen in Table 1, the modern approximation of Biblical Royal Cubit gives us no specific values but a large scale of possible values. Although the Cubit measurements vary, we clearly see that Leonardo had his own opinion of the length of the Cubit: that length is 457 mm. As demonstrated in Image 4, Leonardo painted the number 6 on the left of side of the Mona Lisa in a horizontal position. This number 6 refers to the cubit, which is 6 palms. It is remarkable that Leonardo’s measurement agrees with the modern Encyclopedia Britannica.

Now it is possible to form Leonardo’s approximation concerning the Royal Cubit, too. The normal Cubit must be divided by six and then be multiplied by seven palms.

Egyptologists call the Cubit (532-533 mm) the Late Egyptian Cubit, since it was used in building tombs and monuments in Egypt and Levant. The width of Mona Lisa, 533 mm, is exactly the same unit which is used in Egyptian and Levantine architecture in 900-500 B.C.4

Furthermore, Mona Lisa’s width, 533 mm, matches the height of pyramidion stone called Scribe Moses. Pyramidions are the missing top stones of pyramids and are sometimes left by builders on the side of the pyramid (Peck, 1997). The pyramidion is more familiar to us from the Bible, where Jesus is called “the corner stone” and “the stone builders rejected” (see. e.g. Mark 12:10 and Psalm 118:22). In fact, also Moses named himself after the pyramidion, and therefore it is here stated that like Jesus, also Moses is the corner stone of a pyramid – and what is more – that Mona Lisa’s width is a reference to this theme.

Could this Late Egyptian Cubit and the missing Biblical Cubit actually be one and the same? And could it also be that Leonardo was able to calculate the length of this Cubit and hid it in the elements of the Mona Lisa? Is Mona Lisa also the pyramidion, the stone builders left behind?

where a = b = 1, and thus c = √2, square root of two is a relation of the sum of squares of a and b. Also, the number π is a relation, for instance that between the circumference and the diameter of the same circle.

Another approach to this topic can be found in the Book of Zechariah, which describes the mysterious Flying Scroll which is twenty cubits long and ten cubits wide (in the Bible, Cubits are used in Hebrew language and translated in English as feet). Almost all researchers agree that this Flying Scroll is not a papyrus scroll, but something different. Zechariah continues by telling about a basket for measuring grain. This is called the Ephah in Hebrew, which is also a unit of measure for volume and also a synonym for ‘volume’.

Here, it is crucial to note that Zechariah refers to a specific volume: this unit of volume is the King’s Chamber of the Great Pyramid itself. Zechariah tells us about a volume that is 20 cubits long and 10 cubits wide, the exact measurements of the King’s Chamber. Indeed, for some reason the length and width of the King’s Chamber are clear, but there has always been a problem in determining the height of the Chamber. Some say the height is exactly 5.33 m, which is the width of Mona Lisa 533 mm multiplied by ten. The most reliable result, however, is calculated by Romer (2007). The King’s Chamber is 11.15 cubits high.

Table 2. The dimensions of the King’s Chamber 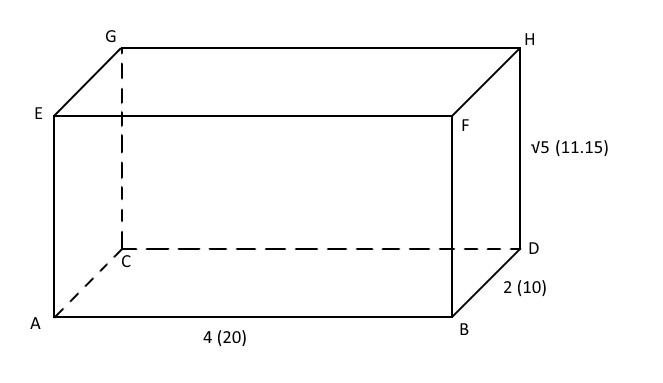 Image 5. The dimensions of the King’s Chamber of the Great Pyramid of Giza

Some mathematicians will, of course, question the result above and argue it to be only a lucky coincidence. But it also gives us the possibility to form our first Conjecture, which is: “The King’s Chamber produces the golden ratio independent of the unit of measurement used.” This means that it actually does not matter how long the cubits are, or whether one applies meters or miles in calculating, because the King’s Chamber will produce the golden ratio in every event. The proof of this is formed into the base of the King’s Chamber and it is here called the Key Triangle (see Image 6).