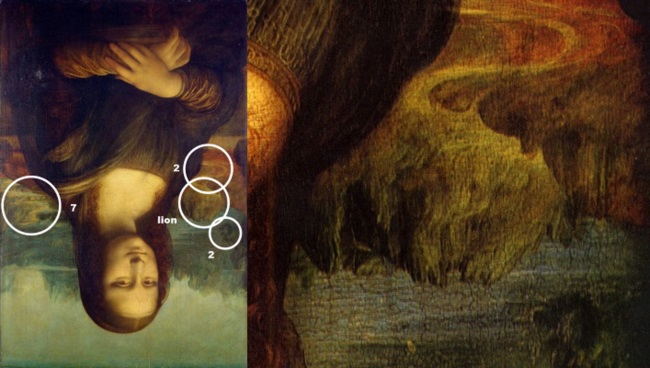 Image 20. Left: Mona Lisa upside down, with the numbers 7 and 2 clearly visible. Right: Close-up of the shape of Lion.

As it was discussed in the elements section (chapter 1; Image 3), 72 is not the only number of significance in the Mona Lisa. Below the gigantic number 2 there is another number 2. This other number 2 is the same number which looks like number 5 in Image 45, when the painting is not upside-down. When uniting these three numbers 7, 2 and 2, we will get the same number as in the elements section (chapter 1) - 722. Between the two 2's we can now see the figure of a lion. These messages are already familiar to us, as discussed above: Leonardo hid certain astrological symbols such as those of Aquarius and Leo (Image 13) in the Mona Lisa, and we also recall that 722 is the height of Mona Lisa character in the painting.

The lion, sometimes depicted with wings, is also a symbol of Mark the Evangelist (Stemp, 2011). If we consider the lion of the Mona Lisa as a reference to Mark and apply the numbers we found behind her, we will come across Jesus' teaching about what defiles a person (Mark 7:22): “Thefts, covetousness, wickedness, deceit, lasciviousness, an evil eye, blasphemy, pride, foolishness:”.20 ‘Lion 722’ is actually the list depicting the most inner evil of a person’s heart – the evil eye.

20 The word evil eye is sometimes translated as envy in the Bible.

The Evil Eye and the Hamsa symbol

One of the most well-known symbols against the evil eye in Christian, Muslim and Jewish culture is the Hamsa symbol. 'Hamsa' means literally 'five' in Hebrew and Arabic. Indeed, the symbol depicts a hand with the five fingers. In some instances, an eye appears in the center of the palm. (Frankel & Teutsch, 1992, p. 70)

In Christianity, the Hamsa is called the "hand of Mary" after Virgin Mary. In Islam, it is called the ‘Hand of Fatima’, in honor of one of the daughters of Prophet Mohammad. Some say that in the Islamic tradition, the five fingers represent the Five Pillars of Islam.21 It is said that for the Jews, the fingers represent the five books of Torah. In the Jewish tradition, Hamsa is sometimes called the Hand of Miriam, after Moses’ sister. (Pelaia, 2014) To sum up, we can generally agree that, in all cases, Hamsa is related to virtuous, also so-called virgin or pure, woman, and therefore this “pureness” itself acts as a protector against the evil eye.

21 The five pillars of Islam are Faith, Prayer, Charity, Fasting and Pilgrimage to Mecca. (Hämeen-Anttila 2004)

Speaking of the symbolic hands, one equally important symbol with khamsa (another name for Hamsa) must be introduced. This symbol is Mano Pantea (or Hand-of-the-All-Goddess), an amulet known in ancient Egypt as the Two Fingers. In the symbol of Mano Pantea, the Two Fingers represent Isis and Osiris, and the thumb their child, Horus. The amulet was used to invoke the protective spirits of parents over their child. (Sonbol, 2005) Osiris is the Father-God of the Hall of Ma’AT described above.22

22 We suggest that there is a similarity of the Hebrew letters in the word Chai (חי) (‘life’ and ‘living’), which could be considered two long lines (fingers) and one short line (thumb), and Mano Pantea trinity symbol.

Mano Pantea is a very complex symbol and it is related to e.g. knife, scales, different dishes, serpent, toad, crocodile, and Egyptian beetle. With these symbols Mano Pantea holds as many teachings as the 12 signs of the Zodiac. Surely one reason to have one symbol refer to so many other symbols – just like in Mona Lisa – is that all knowledge is easier to transfer, when it is in the same place.

In Arabic, 'khamsa' means 'slave', and because of its dual meaning (number 5 and a slave), we draw attention to the Egyptian Underworld Du’at. In Du’at, the dead are slaves and the hieroglyph of Du’at is a fivefold star. The dead, in ancient Egyptian mythology, were slaves to their bodies and souls, devoid of spirit.23 The master of these slaves is no other god than, once again, father-god Osiris himself.

23 The Spirit refers to Father, and without spirit the “dead” are unconscious, having no understanding of themselves. Note here Jesus‘ teaching that whoever has not found Father (the eternal Truth and Knowledge), is still a slave and dead (see e.g. Matthew 8:22).

In the Way of Truth, which is described in the Egyptian Book of Gates, after the fifth hour a person enters the Hall of Ma’AT, where his heart is measured against the Feather of Father himself. If everything goes well, a person will not be a slave (khamsa) to his subconscious mind anymore. Here, the protection and spiritual guidance begin. (cf. fifth hour, number five, Khamsa, Hamsa)

Interestingly, when consciousness takes control of one’s heart, this symbolism can also be understood the other way around: the meaning of the symbols turn into their opposites. From that point on, the Moon does not refer to evil Nature and Life anymore, but rather to Father, Knowledge and Truth. Correspondingly, the Sun is not a masculine symbol of Father, but refers to the lamp of awareness, which is the Son/Child. In this context, the Son is a feminine symbol and its meaning is the Will. Thus, it can be said that the Son is ‘Living Father’, or ‘God’s Will’. In the end, enlightenment is nothing more than fulfilling God’s Will both in one’s Earth (subconscious) and Heaven (consciousness). This is also the ultimate goal of the Way of Truth.