Pythagorean Theorem, and Earth and Moon form a 3-4-5-triangle

Our next topic is highly debated in the field of Mathematics: who was the first person to use the Pythagorean Theorem and one of its famous results – the 3-4-5-triangle. We can at least show that the builders of the pyramids must have known this theorem already app. 2500 B.C.

In the right triangle, the square of the hypotenuse (the side opposite to the right angle is equal to the sum of the squares of the other two sides. The theorem can be written as an equation relating the lengths of the sides a, b and c, which is often called the "Pythagorean equation":

where c represents the length of the hypotenuse and a and b the lengths of the triangle's other two sides. (Sally, 2007) 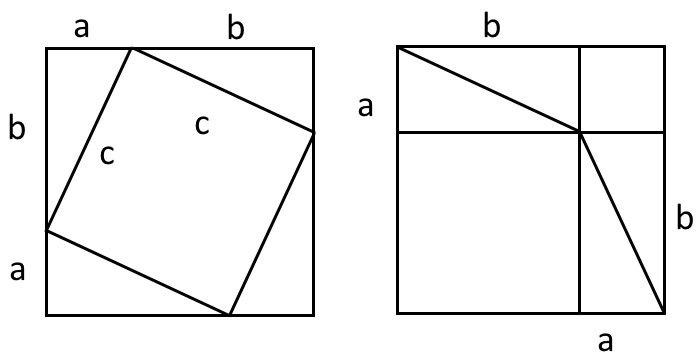 The converse of the Pythagorean Theorem is also valid: If the square of one side of a triangle is equal to the sum of the squares of the other two sides, then the triangle is a right triangle.

A fine example of converse Pythagorean Theorem is

thus there must be a right triangle with sides of 3, 4 and 5.

Historians consider it a possibility that this knowledge above was applied in the construction work of the Egyptian pyramids, when architect needed a right angle. The Egyptians tied 12 knots with even gaps to one rope. Then the rope was formed into triangle, where were the sides of 3, 4 and 5 knots. This is how the first right angles were made.

The Pythagorean Theorem is again on the table in our next Theorem. Here, this ancient knowledge is connected to the geometry of the Earth and the Moon.

The Earth Square and the Moon Square form a 3-4-5-triangle. 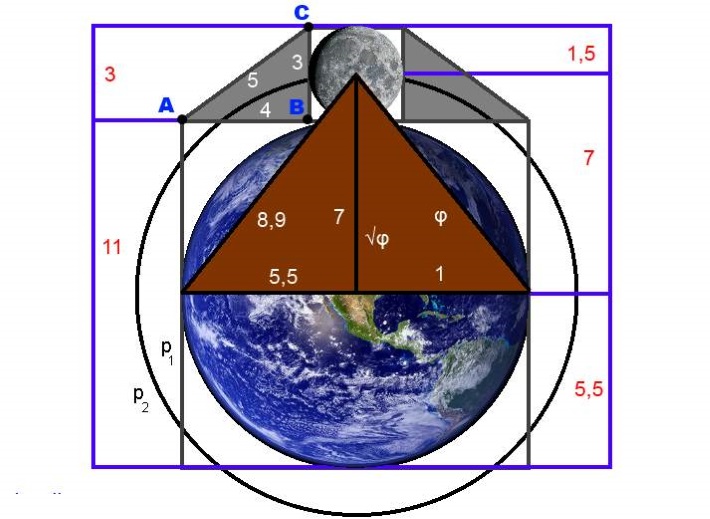 AB = 4, because of the diameters of the Moon and the Earth

AC = 5, because of the Pythagorean Theorem is valid

Now, we are approaching the main results of the mathematical part of this study.