The Elements of Mona Lisa

It was Pythagoras who first said that everything is related to numbers. Later, Plato wrote above his school gate: “Let no one ignorant of geometry enter here." (Priestley, 2012) Finally, Leonardo himself said: ”Let no man who is not a Mathematician read the elements of my work.” (Sketch number 3. Richter, 1888).1

1 Even when Nicholas Copernicus revolutionized the science with his book De Revolutionibus (On the Revolutions) in 1543, his book began with the words: “Let no one untrained in geometry enter here.” (Copernicus, 1543) 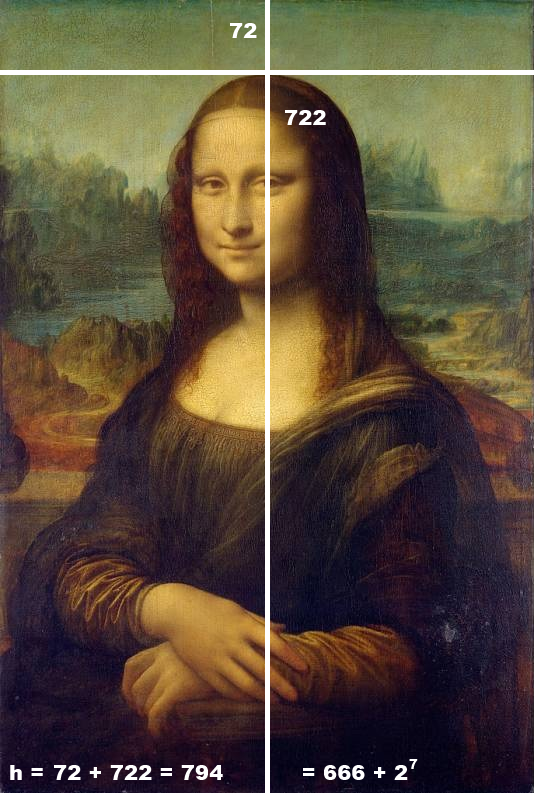 Image 3. The height of Mona Lisa

A student of the Mona Lisa will learn that the dimensions of the painting are 77 cm x 53 cm. However, as researcher Vincent Delieuvin of the Louvre Museum states, the measurements are not accurate: “The panel of the Mona Lisa is a piece of wood made by a carpenter at the beginning of the 16th Century. So it is not a perfect rectangular! In fact the measures varies regularly between 53,3 and 53,4 cm, and between 79,1 and 79,4 cm.” (Email December 10, 2013)

The equation above demonstrates the mathematical connection between the numbers 72, 722 and 666, to which we will return later (See also Images 3, 8 and 46 and Appendix 10).

2 See for instance our study demonstrating how the elements of Leonardo’s painting the Last Supper match the elements of the Great Pyramid of Giza. The study (Appendix 10) explains how the number 153 plays a significant role in encoding the painting’s hidden message.