The Final Appendix 15. Invitation to the Tree of Knowledge

The most widely known sketch of the world is probably Leonardo da Vinci’s Vitruvian Man. With this sketch Leonardo clearly shows us the calculating error of Vitruvius himself. In the words of Vitruvian there are huge contradictions: man cannot be both 7 feet and 4 cubits, thus

Leonardo must have found this error too, because he teaches us to use 7 palms as the measure of the cubit rather than 6. With this correction, there are

This is not the only piece of knowledge inscribed to the sketch. The other one is about the eternal Father himself. His sign is the geometric shape of the Lakshmi Star (also Rub el’hizb), where two squares are united. This is a symbol of Noah’s ark and Nu’s night ark, which included four times two people inside them. With our eightfold path, we use Image of the All – Mona Lisa. 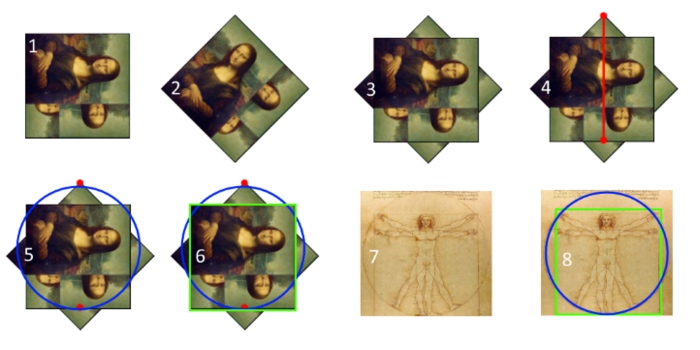 Because parts 1 and 2 are squares, they form the shape of the Lakshmi Star (3); this is the beginning. Next (4), we shall make a line from the center spot of the lower edge of part 1 to the top center corner of part 2. This is our Diameter (red line). Next, the circle is drawn based on the Diameter (5). Then part 1 is highlighted and added to part 5; this is part 6. Then we retrieve the geometric shapes from Vitruvian man (7). Finally, the square and the circle are removed from art 6 and added to the Vitruvian Man (7); the result is part (8). In the terms of geometry there is a 100 % match – a perfect hit. And because of Image 81, it is absolutely sure that Leonardo da Vinci was also familiar with the Star of Lakshmi. 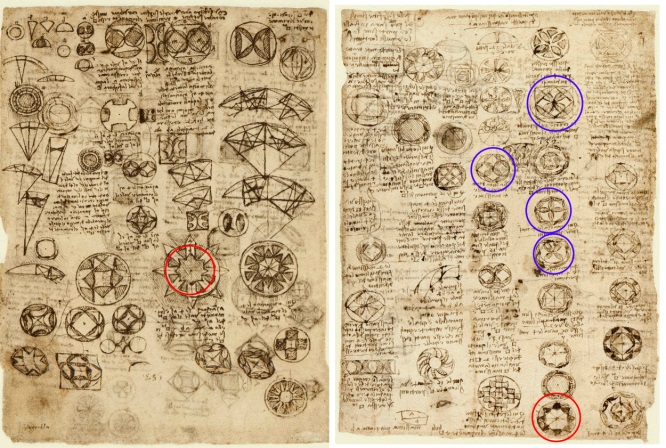 The Vitruvian man is the most well-known symbol of knowledge. "Leonardo envisaged the great picture chart of the human body he had produced through his anatomical drawings and Vitruvian Man as a cosmografia del minor mondo (cosmography of the microcosm). He believed the workings of the human body to be an analogy for the workings of the universe." (Encyclopædia Britannica, 2014) Also, the thinking process in Image 80, in language of symbolism and geometry, agrees with Encyclopedia Britannica. But there is still one more question to answer - what is, exactly, the knowledge? The Ancient Egyptians gave us an accurate answer. Knowledge is Nu – our Father.

To be able to see our Father, you will need both eyes. The left eye is the eternal one, the eye of the Spirit and Father itself. It is called Night-Bark or Noah’s Ark. Because the Holy Spirit has only two aspects – Knowledge and Life – the left eye is number two (2). As a kind of an opposite for the left eye, the right eye is the always moving and refining one, the eye of the Life. It is called the Right Eye of Horus or the Soul of a person. Because our soul has seven aspects – Consciousness, Memory, Creativity, Reason, Emotion, Subconscious and all the previous together as Will/Self – the right eye is number seven (7). As soon as you have both eyes, you will know God face-to-face – and soon like Son knows his Father. This is why there are those huge numbers – number 2 on the left side (Eye of the Spirit) and number 7 on the right side (Eye of the Soul) – in the background of Mona Lisa. And because Mona Lisa has both of these eyes, they together are his/her all-seeing eye – the healthy eye.

Mona Lisa is an Image of God.