The Hebrew alphabet, Gematria and the numerical value of ‘Mona Lisa’

The Hebrew alphabets contain 22 letters, 5 of which have a double meaning, depending on whether the letter in question appears at the end of the word or somewhere else. In fact, all Hebrew letters are ambiguous, having multifaceted meanings. The letters have a numerical value, an astrological sign or constellation, a symbolic meaning and even their own names. For instance, the first letter, called aleph, meaning ‘ox’, has a numerical value of one (1) and its zodiac symbol is the Air.33 34

A Hebrew numerology called Gematria is used in Kabbalah to interpret hidden meanings of words, and the relationship between the ten Sefirot 35 and the Hebrew alphabet. It is an extremely complex art, applied in a number of different ways. (Signs & Symbols, 2008) The use of Gematria is not limited to the Kabbalist purposes alone: for instance, all the names of the Bible have their numerical values and are worth further exploration. Even John in the Book of Revelation teaches about the famous number of the Beast – 666 (Revelation 13:18).

There are several possible ways to calculate the numerical value of the name ‘Mona Lisa’, because some letters have more than one numerical value. All the variations are

thus the name has 64 different numerical values. This means that – mathematically – choosing only one value is not rational. But we must remember the context: if we come across certain numbers loaded with meaning as we have e.g. through the dimensions of the Mona Lisa, they will rather support than deny this study. 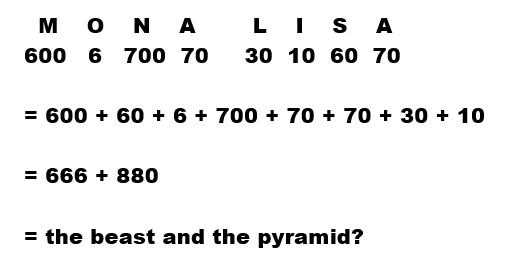 Image 46 presents a way of calculating the numerical value of ‘Mona Lisa’ using the numbers 666 and 880. The number 666 is traditionally considered the number of the Beast and as 880 the famous number of the Great Pyramid (see Theorems 4 and 7). In other words, it should be noted that even the numerical value of the name Mona Lisa refers to the two Eyes of Horus the Elder. These two eyes are the Sun and the Moon – the All-seeing-eye and the Evil eye – the Beast and the Great Pyramid.36

36 Because we are aware of the number 72, we should find which Hebrew word is identified with it. Numbers 70 and 2 are the letters Ajin and Bet, which are ‘the Eye’ and ‘the House’, and together, ‘the Eye of the House’. Also the word Ajin + Bet (עב) means ‘cloud’ in Hebrew, which associated with the Mona Lisa through the Eye in the Sky, surrounded by clouds (Image 18).