The New Era of Mankind

Another famous painting by Leonardo da Vinci, the Last Supper, can be understood as a type of calendar and a reminder of an ancient way of measuring time – i.e. the Great Year (Appendix 10). Today, we follow the solar year with its approximately 365 days. Some cultures have applied so-called lunar years, which are 11 days shorter than our solar year. The Great Year is a time period which can be calculated using the celestial Zodiac calendar. It functions on much larger scale compared to the solar and lunar years. The Great Year is also called the Platonic year. After 13 years of studies in Egypt, Plato defined the “perfect year” as the return of the celestial bodies to their original positions (Diop, 1991). Today, e.g. NASA has its own approximation for the Great year (25 800 years). 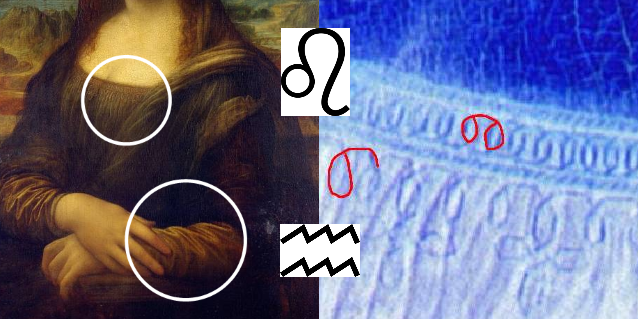 Image 13. Mona Lisa’s arms represent the sign of Aquarius and the dress is decorated with the sign of Leo

In the Mona Lisa we also find the eternal symbols of Astrology and the Great Year. We might be familiar with certain speculation and prophecy (see the Symbolic Eras below) concerning the next era of the Great Year which is of significance for the whole of humanity; this is the symbolic era of Aquarius-Leo. Perhaps Mona Lisa’s symbols are a reminder of this transition, which is now taking place. The sign of Aquarius is the lower hieroglyph and correspondingly the sign of Leo is the higher hieroglyph in Image 13.

The Bible begins with Genesis, when the first two people are created as one person, or humanity (Genesis 1:26). Bible describes how Eve was created from the rib of Adam (Genesis 2:21-22). In another translation, Eve was created when God “took part of the man’s side”. This word ‘side’ is in Greek ‘pleuran’ and has the numerical value 666. This connection is remarkable in Mona Lisa as well.

In a similar story of creation, the twin brothers Romulus and Remus create ancient Rome. This happened during the symbolic time of Gemini, or Twins. The symbolic eras are based on the Zodiac wheel, but here we follow the wheel counterclockwise, unlike most interpretations. The Twins, Adam and Eve (or Egyptian Shu and Tefnut), represent the same symbolic period of time as that of Romulus and Remus. The next sign to follow them is the Taurus, or the Ox.

After the Twins were banished from Paradise, a time period followed during which people began to consider cows and oxen as sacred. For instance, the Egyptians worshipped Apis, the bull-deity. The era of Taurus ended with Moses climbing the mountain of Sinai (or Horeb), where he spent 40 days to receive the 10 commandments. When he returned, the people had built and started to worship the golden calf statue (Exodus 32:4). Moses was disappointed and returned back to the mountain. After another 40 days he came back with the commandment which forbade the worship of any Image of God, such as the Golden Calf.

This began the era of Aries. During this era, God told Moses to paint the edges of doors with the blood of Aries before leaving Egypt (Exodus 12:1-12). This was the first sign of a new era. The sign of Aries began the time of the Shepherds. The shepherd is continuously in contact with nature and guided by the All - the Holy Spirit. Therefore shepherds have been typically considered holy persons with tremendous wisdom and the ability to see the future. The time of Aries ended when Christ was born.

The Gospel of Luke (2:8-12) teaches us: "And there were shepherds living out in the fields nearby, keeping watch over their flocks at night. An angel of the Lord appeared to them, and the glory of the Lord shone around them, and they were terrified. But the angel said to them, “Do not be afraid. I bring you good news that will cause great joy for all the people. Today in the town of David a Savior has been born to you; he is the Messiah, the Lord. This will be a sign to you: You will find a baby wrapped in cloths and lying in a manger.” The shepherds hear the news of Jesus first, because they are marked by the sign of Aries. This is the sign of the new era – that of Pisces. In the traditional version of story there are three wise men (three Baptisms of Way of Truth), who followed a star to find Jesus. The birthday of Jesus is celebrated on December 25th when sun rises after staying dead for three days (21st-24th December), as you will notice in the astrological comments of this study.