The Reed in her hand

Before going more deeply into the mathematics of the Mona Lisa, it is important to understand some of the symbolism related to the painting. 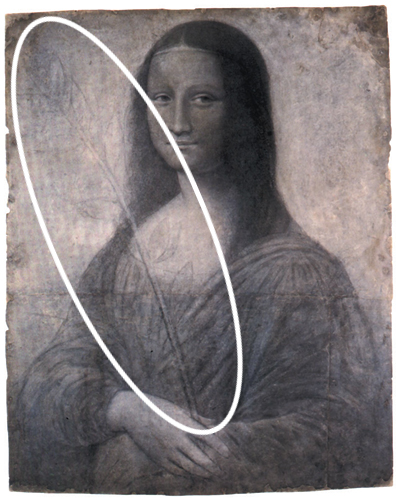 The Hyde Collection in New York holds a charcoal and graphite sketch of the Mona Lisa holding a plant called reed in her hand. Whether this is a sketch by Leonardo himself or someone else, is not known. However, the sketch does reveal an important aspect of the actual Mona Lisa. Incidentally, the reed is also a unit of measurement, also familiar to us from the Bible. In fact, one reed equals 6 cubits. Unfortunately, the museum of the Hyde collection provided no response to our numerous requests to confirm the exact dimensions of this artwork.

The reed is also an Egyptian symbol. In Ancient Egypt the heaven was depicted as a Sea of Reeds. This place was called the fields of Aaru and going to heaven was the ultimate goal of all the followers of Father and Ma’at – the universal knowledge about the good and the evil, and the divine order of Nature. Both Egyptian and Biblical texts bear testament to how the reed is a symbol with great significance in the tales of the past.

The reed in the Bible

“And there was given me a reed like unto a rod: and the angel stood, saying, Rise, and measure the temple of God, and the altar, and them that worship therein.” (Revelation 11:1)

“I saw a wall completely surrounding the temple area. The length of the measuring rod in the man’s hand was six long cubits,[a] each of which was a cubit and a handbreadth. He measured the wall; it was one measuring rod thick and one rod high.” (Ezekiel 40:5)

Footnote [a]: That is, about 11 or about 3.2 meters; also in verse 12. The long cubit of about 21 inches or about 53 centimeters is the basic unit of measurement of length throughout chapters 40–48. (Holy Bible, New International Version)