The book Leonard de Vinci says that whatever Leonardo did, he always returned to the Mona Lisa time after time, as it were a source of inner peace, refreshment and serenity (Antonina, 1952). Here, we will recall a sentence from the very beginning of this study: “Whoever shall make a copy of the Duat, and shall know it upon earth, it shall act as a magical protector for him both in heaven and in earth, unfailingly, regularly, and eternally” (The Book of What is in the Duat)57 This sentence is our key to revealing the true meaning of the Mona Lisa painting. It is a copy of Du’at!

57 Long before the Book of the Dead (properly titled the Book of Becoming Light) was written on papyrus scrolls and left in the tombs were the famed Pyramid Texts. These long rows of hieroglyphs, likely the oldest religious writings in the world, were placed in pyramids of the Old Kingdom at Sakkara. By the Middle Kingdom the Book of the Dead, and a number of other texts, were found in tombs in the Valley of the Kings and Queens. These texts included among them the Book of What is in the Duat. (http://www.egyptian-wisdom-revealed.com/books/book-of-what-is-in-the-duat/)

Ross King considers in Leonardo and the Last Supper: “In 1987 the American artist Lillian Schwartz used a computer program to align the face in the Mona Lisa with the supposed self-portrait of Leonardo in the Biblioteca Reale in Turin. She discovered that their eyes, eyebrows, nose and chin matched so closely that the mirroring could not be coincidental – meaning the Mona Lisa was really Leonardo’s self-portrait in drag. She pointed to the painting’s apparently hermaphroditic quality by calling her Mona/Leo.” [---] “Her theory is undercut by the fact that the sketch in Turin is not Leonardo’s self-portrait, but if the two faces do indeed mirror one another, then the Mona Lisa may well have been based at least in part on a male model.” (King, 2012) 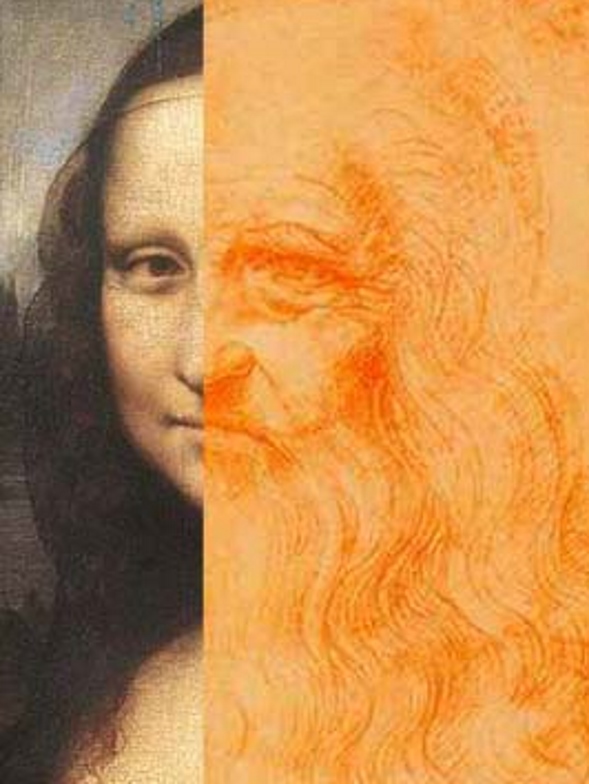 As it has been discussed in this study, Leonardo based his entire life’s work on hidden symbols, mathematics, geometry and careful measurements. The matching elements in the Mona Lisa and the sketch in Turin cannot be considered a coincidence. Unlike King concluded, it is highly possible that the sketch is indeed a portrait of Leonardo himself. In fact, it is possible that the picture of an old man and Mona Lisa (Image 52) are both Leonardo’s self-portraits.

In the language of symbolism it can be said that Mona Lisa is the inner Christ of Leonardo da Vinci and his sacred trinity. That is why this painting held an almost sacred position in Leonardo’s life and therefore acted as source for his inner peace, refreshment and serenity. When a person builds, on purpose, the copy of Du’at in one’s life, it means also that a person walks the Way of Truth at the same time. This is also how a person him-/herself transforms into a copy of Du’at, or an Image of God.58 That is what Mona Lisa truly is – an Image of God. Everyone can weight on the scales of their mind, whether Leonardo achieved the eternal life.